Plant a tree in memory of Teresa
An environmentally-friendly option 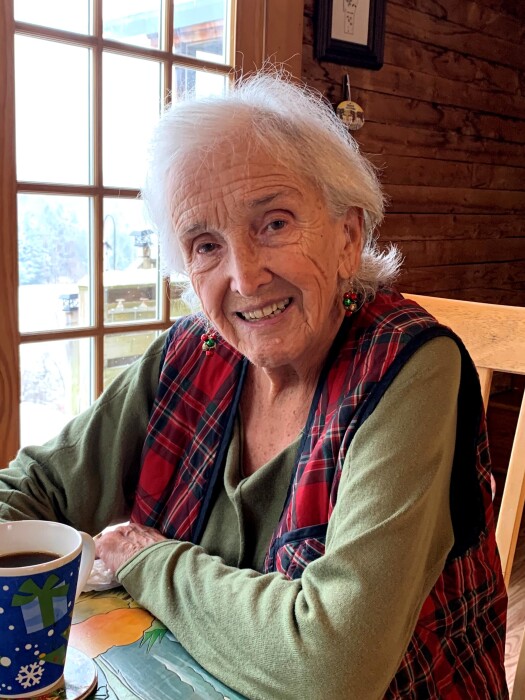 On Wednesday, April 21st, Teresa K Hallquist, loving mother and sister, passed away at the age of 89 in Wolcott, Vermont after a long illness.

Teresa was born on December 21, 1931 in Punxsutawney Pennsylvania.  She was the youngest of twelve surviving children.  In 1952, Teresa moved to Washington, DC to pursue a nursing degree. There she met Norman J. Hallquist, a student working on his engineering degree under the GI bill.   They married and had seven children. During their lives together, they lived in many places, including Hartford and Syracuse, NY, Burlington, VT, and Lewes, DE.  After the death of Norman, Teresa shared her life with James C. Kovarik, a friend for decades of both Teresa and Norm.

Teresa was a great cook and had an incredible fashion sense.  She and Norm were bridge partners and wonderful dancers.  She loved to play blackjack and, after the death of Norm, was often seen at the casino tables with Jim.

Teresa will be buried in a gravesite by her mother in Punxsutawney, Pennsylvania on June 5th.  Funeral Services will be held at Saints Cosmas and Damian Church in Punxsutawney at 11 am on that day.  Donations can be made in her name to Lamoille Home Health and Hospice in Vermont or plant a tree in her name by visiting the des Groseilliers funeral home website at https://www.holcomb-desgroseilliers.com.

Plant a tree in memory of Teresa by clicking here.
To send flowers to Teresa's family, please visit our floral store.

Plant a tree in memory of Teresa
An environmentally-friendly option

Plant a tree in memory of Teresa

3 trees planted in memory of Teresa

My condolences to your family. Your mom ( and dad) always made my folks smile and we have good memories with our families together. I know I knew the girls best as our moms sewed gunny sack dresses and copied LL Bean bags for Christmas gifts one year. Our parents enjoyed many late nights of progressive rummy card games and I’ve heard stories of homemade wine...
Cancer sucks and you all have had to endure to much of it. I’m sorry. Much love to you all.❤️Heidi Gaskell Chobot

With love and hugs
Jess and Miranda

A Memorial Tree was ordered in memory of Teresa Hallquist by Jess and Miranda .  Plant a Tree

What a lovely family you created. RIP Terry, I was honored to meet you!

Thank you for everything, Grammy. Your memory lives on with every jar of sun tea that I make, every martini cheers, and every round of blackjack (well, just the rounds that I win). I love you.
Jillian

A Memorial Tree was ordered in memory of Teresa Hallquist by Jillian .  Plant a Tree

Deepest sympathy on the loss of your Mom
Nancy &Tom Conway

A Memorial Tree was ordered in memory of Teresa Hallquist by Nancy &Tom Conway.  Plant a Tree

Plant a tree in memory of Teresa